Las Vegas, NV (Py) - Carrying the Super Tooth's tradition, they brought in Las Vegas sexiness from the Fantasy Las Vegas show dancers and mixed with their sleek design style, and thus created the crowd awe-striking performances.  They are really + really good!  Maybe we will visit their show next time we are in town. 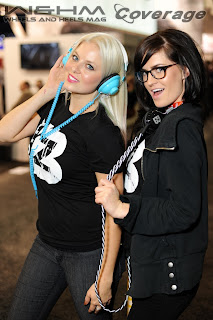 Hypers' "Cameramator" is  cool gadget which won the 2013 CES product of the show.  Basically, it's a hot-shoe-mount wi-fi hub module that can transmit you camera shots directly to your iPad.  This way the clients that you shoot for can instantly see the pictures without the clunky laptop or desktop computers.  Neat! 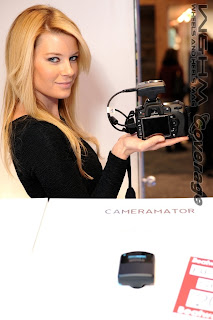 Harman Kardon had a lot of models at the show.  And they are all so cute and friendly.

Powerhouse Alliance had three tall slender models who took care of a huge real estate on the floor.  Good job!

Mercedes Rangel showed us the Accele systems and we sure took a lot more pictures of her too!  Mercedes is really cool that she told us where she would be at the show, and we made sure to make our way to her to capture those great pictures of her.  Awesome!

TCL is the new branding name for the legendary Chinese Theater.  How a Chinese firm takes over an American Chinese icon...  Very interesting twist...   Anyway, the model at TCL booth is very cool too. 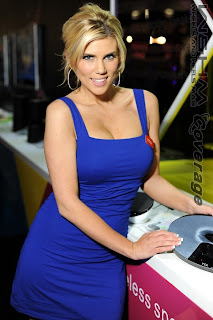 Viewsonic has that sophisticated look that totally worked for us.  Keep it up guys! 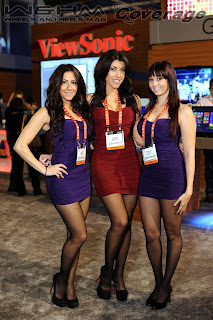 ZTE may not be a big name brand in the US, but they are big in Cihna.  Their models are awesome too!  Their screen added even more load to our visual sensory impact. 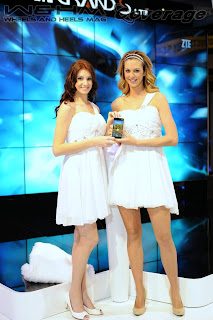