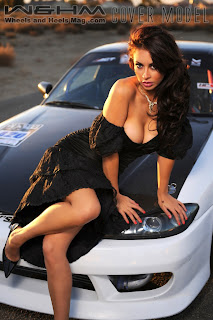 W&HM: You also mentioned you are a drift driver. That’s so cool! How did you start?

Melyssa: I was introduced to drifting in 2010 as Miss Formula Drift. My job was to interview the drivers, however in doing so I developed an immense drive to try it for myself. After the Formula Drift season was over I was so amped to become a drifter myself I enrolled in pro drifter Taka Aono’s drift school. And started burning rubber myself.

W&HM: Wow, awesome! You are amazing! What would be your goals in drifting?

Melyssa: Like I said before I am currently driving in a select few pro am series and my hopes are to get sponsored and receive a Formula D license so I can compete against the same individuals who I once interviewed and inspired me.

W&HM: I am sure that it will come very soon, one day we should go drifting together. Well, I have to be in the passenger seat though… haha

Melyssa: Haha, you better hold on!