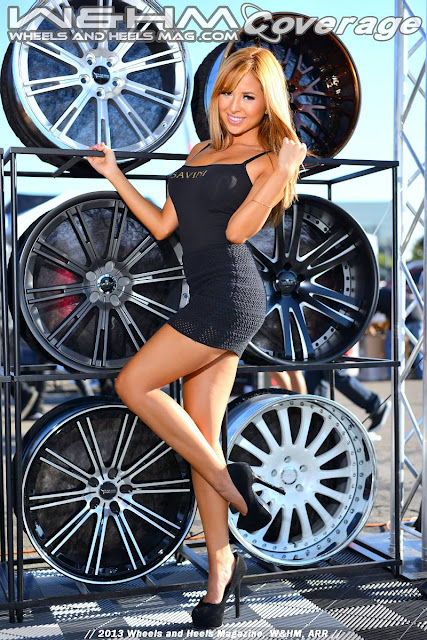 Anaheim, CA (Py) - First of all, just want to tip the hat off to Py (myself), because I was crazy enough to cover three shows in one day (DUB, 86Fest and SShowcase Hooters Ontario). It's a pretty warm day and running across Los Angeles, San Bernardino and Orange Counties is a lot of driving to say the least.  However it was really great to see all the awesome models and familar buddies and many cool cars at the shows!!  It's all worth it!  :-)  Thank you all!!

2013 DUB Anaheim show is a great show, especially after last year's typhoon-like weather which dampened the attendees' spirits to some degree.  This year, it's all sunny (81F), breezy (9mph), a bit on the toasty side, which is perfect for a Sunday afternoon outing to the car show, and enjoy the loud music, rows of DUB style cars, stunning models, and lively concerts.

Many models at the show are the top tier models, including some of our cover models and cover models soon to be.  It's always great to see them and catch up all the good things in life.  Also at the DUB show, a common phenomenon is that many future models dip their feet in the water and get the first time exposure to a wide crowd.  They could be like super model skinny, or super leggy like Ana Hickman, or curvy like Botero's paintings, or passionately wild like Madonna int he 80's.  It's a wonderful world!

For the vendors' named models, we have Claudia Alan for Savini.  She easily won our top model coverage here simply by combining the motifs of Wheels and Heels in the picture.  She is such a sweet and super photogenic model to shoot with!  Totally awesome!  Together with Claudia is Angelina who is also part of the Diamond Dozen models.  Both are so radiant!!  Wow + Wow!! 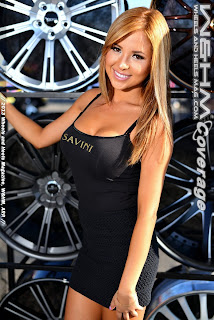 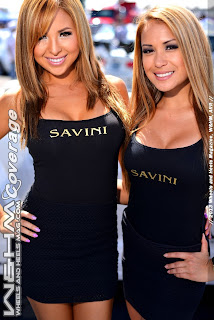 2Crave Wheels always have awesome models.  Here we saw Arley Elizabeth, our current cover model!  We showed her the print edition of the magazine, she was greatly ecstatic about it and showed it to people!  We are so happy and honored to have her as our cover Together with Arika Sato, Ashley Harrell (below left), and Brittany Brickner, the cool 2Crave foursome was formed.  They are simply beautiful and friendly.  We salute to them and to the 2Crave marketing team! 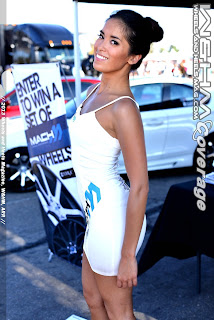 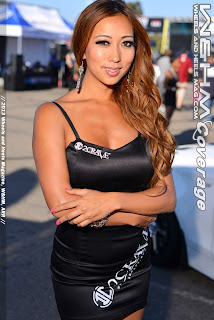 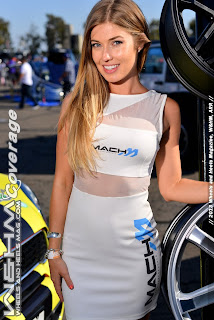 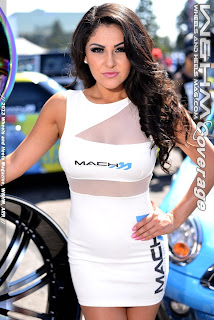 Joling Ferro and Monique Lagorce look especially wow with their Customs 411 magazine's red mini dresses.  Their legginess and hotness made them a super popular duo at the show! 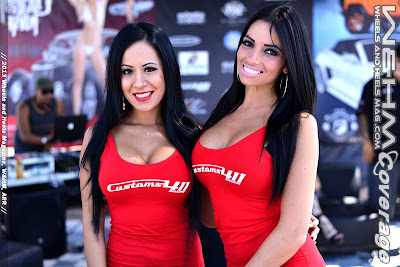 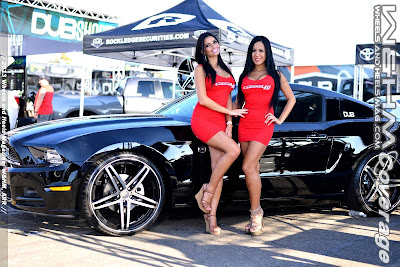 Jessica Weaver at the Vertini booth, has a special happy glow in her.  It's soooo nice to see her again and take incredible pictures of her!  It's a great day for sure! 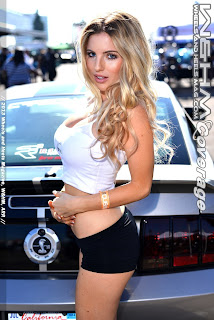 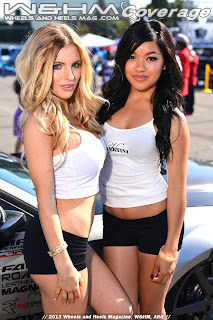 We also meet up with our cover models, Lea Anne and Lyna Ly Sparks!  They are two hardest working models that we know.  They are assertive, they are proactive and they are communicative!  Super cool!  Always a pleasure! 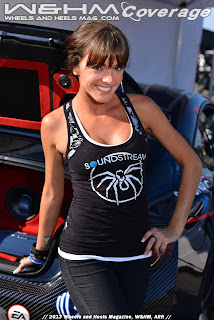 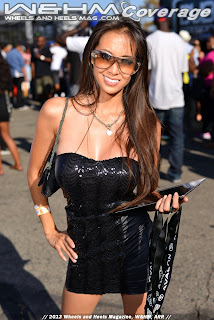 At the Stance Wheels booth, we have Sally Miakior, Xena Kai, and Joselyn Cano, the three gorgeous graces!  They are the cool Charlie's Angels for the Stance booth, and definitely created a flash crowd wherever they stand in front of.  That's what we called the promotional modeling at great work! 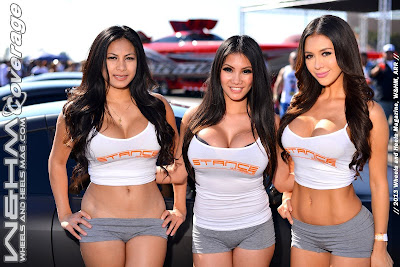 Brittani Paige has established herself as a super cool, wonderfully creative model with a super networking talent.  She has given R1 Concepts booth a lot of media opportunities!  We simply love her! 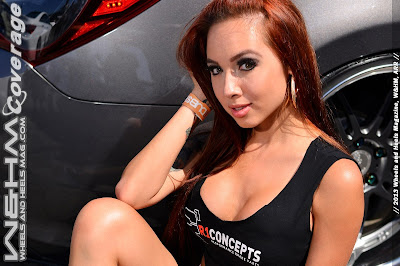 At the JDM Sport booth, Jasmyn Skye and Lena Love are looking awesome in their own styles. It's great to see them, as you can feel the closeness to them always.  Very cool! 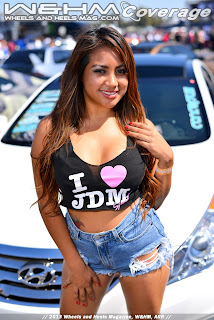 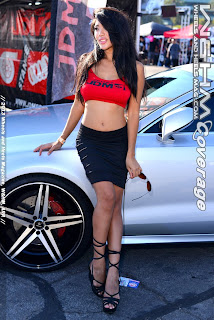 Dawn Jaro was at the Forgiato booth, which is a huge and full of high end performance cars and wheels.  Totally cool!  Little Star (below right) has a really good manager, who reminded us her name via her petite size and stars on her leggings.  Now we cannot forget it.  Brilliant!  That's what we called a good manager on this aspect! 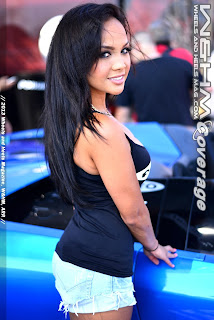 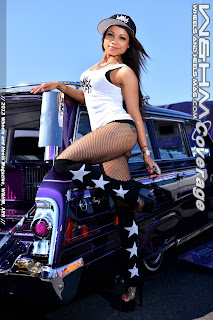 Lorena Salazar for Zenetti Wheels was hard to miss, as she is super tall, compared to the attendees, and she constantly got people's attention by giving out flyers.  Great job!  Raelynn Inez Barajas and Alysia Cuerrero were having tons of fun at the DUB show.  It's sooo happy to see them again, as we just saw them at the Extreme Autofest San Diego show earlier.  We definitely look forward to seeing them more! 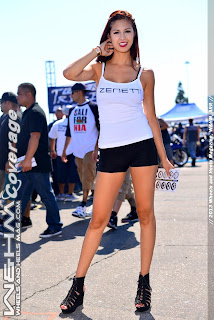 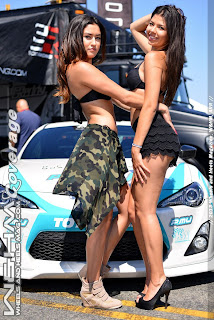 Rachel Centolella has a new hair color.  Under the sun, they are very cool neon-ish purple, and is especially cool with all these shiny and colorful cars.  It's great to see her again!! 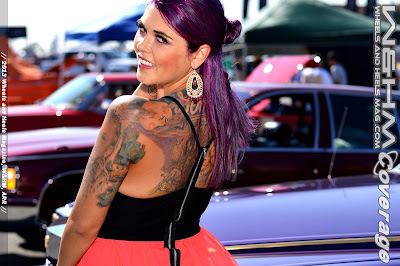 There were many models that we never met before and they are simply fantastic to shoot with.  Each has her own personality; some are confident, some are eager, some are pleasant, some are cool. You actually get a feel of the models at the scene through these four models.  Very interesting! 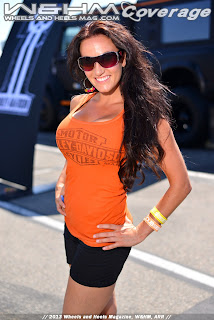 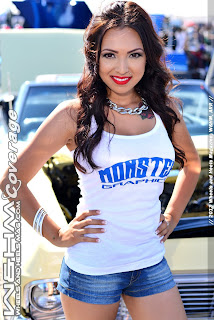 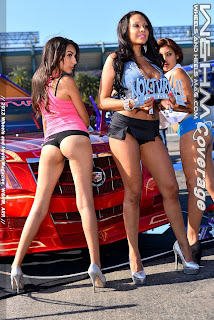 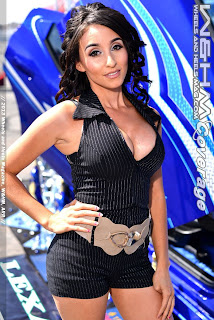 Overall, it's a wonderful show.  This year's DUB definitely brought a lot of fun to the attendees.  We definitely look forward to the next one!

* To see all coverage of past DUB shows, click here [int link].
* To receive free stuffs from our magazine, sign up here: http://eepurl.com/B9kMT