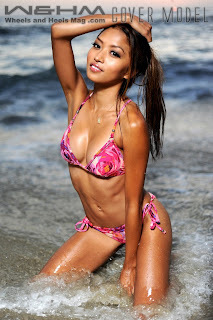 W&HM: Now you are in Los Angeles, what would be the thing that you miss most about Hawaii most?

Kristy: The beach!  Hands down the beach!

W&HM: Haha!  Then what kind of Hawaiian foods do you like most?

Kristy: I like Loco Moco, but the most is Poke!  That's my favorite!  It's like raw fish, like Ahi or Tuna, in chunks, like little cubes, marinated in awesome and goody sauce.  Usually it's soy sauce based, with green onions or seaweeds, stuffs like that.  Yea, it's just raw fish, seasoned and marinated.  I like to eat it with rice...  I am getting hungry now... Haha

W&HM: Haha, it's dinner time now...  Well a different subject.  How do you like modeling?

Kristy: Modeling is fun!  You get to do things like this (referring to the beautiful beach that we were at) and create awesome images, like telling a story.  I like story telling pictures.  They say a picture is worth a thousand words.  I totally agree.

W&HM: That's awesome!  Well, if you can tell one thing to new models, as an advice, what would it be?

Kristy: I would say for anyone that wants to start in this industry is to stay true to yourself.  You know, just be yourself and don't be what the industry wants you to be.  If you want to rock pink hair, then rock pink hair.  If you want to have tattoos, don't be embarrassed about it.  There is a whole market out there just for that.  Just rock it.  Stay true to yourself.

W&HM: Wow, that's very cool!
Kristy: Also, networking is the most important thing in this industry.  You know, like to meet people, and be nice to EVERYBODY (Wagging her finger to emphasize on this point), because you never ever know whom you are talking to!

W&HM: That's so true.  That is so awesome!  That's one of the best ones that I've ever heard.  Totally awesome!
Kristy: :-D